Thinking of going for a run? Tacoma is a great running town. Whether you’re just visiting or have put down roots here, the City of Destiny makes for a perfect running destination. Runners young and old hit the city’s streets and trails year round.

Ruston Way teems with runners, walkers, roller-bladers and sightseers, especially on weekends and when the sun makes an appearance in the winter. Visit on a cloudy weekday to have this 2-mile paved waterfront path to yourself.

The gently rolling terrain, enormous shade trees and tranquil ponds of Wright Park make this a classic urban park. Perfect for a relaxing run after work.

The dirt trail around Snake Lake is just a touch more than a mile long, but you can extend your run by climbing the ridgeline. Cross the bridge in the middle of the lake to create a figure-eight circuit. A great place to spot wildlife, especially waterfowl.

Few running locales provide more diversity than Fort Steilacoom, located in nearby Lakewood. Whether you prefer wooded trails, open meadows or rolling terrain, it’s all here at this 340-acre park.

Other parks in Tacoma with space to run  include the Proctor District’s Puget Park, East Tacoma’s Swan Creek Park, and South Tacoma’s Wapato Park. If you prefer a more industrial location, check out the Thea Foss Waterway or the Scott Pierson Trail, which follows Highway 16 before crossing the Narrows Bridge on its way to Gig Harbor.  Several neighborhoods boast tracks, from all-weather rubber ones that hold up well in any weather to ancient cinder relics that turn to mush in the rain. Availability and hours of use vary. 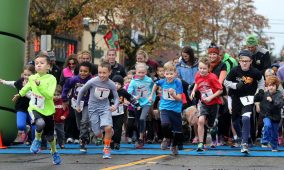 On almost any given weekend, runners can participate in local races and fun runs. The granddaddy of them all, Sound To Narrows can trace its history to the early 1970s, just as the US running boom was hitting its stride. If you’re intimidated by the hilly 12-kilometer course, you can opt instead for the 5K, a recent addition to the event.

The Tacoma City Marathon features a challenging-yet-scenic course that draws runners from all over the county. Distances offered include the full marathon, a half marathon, 5K and 1K.

Runners swarm over Tacoma’s iconic Narrows Bridge for the Tacoma Narrows Half Marathon, which starts in Gig Harbor and finishes at Tollefson Plaza in downtown Tacoma.

Holiday-themed fun runs abound in Tacoma, from the downhill Independence Day 5K to more than one Turkey Trot, including one in Proctor and one at Norpoint. Throw on your craziest costume for the Black Cat Fun Run before Halloween or the Santa Runs in December. Old-school cross-country races, small neighborhood fun runs and other, more quirky events round out the calendar.

If you enjoy company when you run, check out the Tacoma Runners, the Interurban Running Club or the Silver Striders, three of a handful of running clubs in the area. Those who consistently finish near the front of the pack might be fast enough to join the Tacoma City Running Club, an elite team of open and masters runners.

Finally, if you need shoes and other running-related gear, you’re in luck. Tacoma boasts three different running stores. Fleet Feet serves the Proctor neighborhood, while South Sound Running has locations downtown and at Point Ruston, just a few meters from the waterfront trail. Special sales, organized weekly training runs and pub runs are among the offerings.

Running in Tacoma  By MATT KITE for THE HUME GROUP 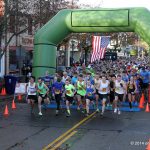