Carr arrived in Tacoma and claimed a big chunk of the Ruston Way waterfront. He was actually late to the party. Someone grabbed that real estate first. In 1853 Peter Judson claimed roughly the same land but lost his place in history when he abandoned the site two years later. The Indian War caused fear in isolated communities of our region and Judson bugged out, making no further appearance in Tacoma history. So Job Carr’s claim bestows FIRST SETTLER status and all the glory that goes with it. Perhaps there is a street and a park bearing Peter Judson’s name in some other American city.

Carr, at 51, would have been considered quite old (yikes) in those days, and therefore not what one would think of as a rough and tumble pioneer. He was anti-slavery and anti-war. He’d been wounded in the Civil War where he met his first wife, Rebecca, in a field hospital. The marriage produced four children but did not endure. Carr headed west.

Good fishing, low bank waterfront and access to fresh water attracted the “old” man to the special spot we now call Old Town and the Historic North Slope. He soon built a two-room cabin. Why just two rooms? He had to cut each log himself and build the place by hand. Also, it was just him and his cat.

Job’s eldest son, Anthony, joined them in September of 1865 and helped add a proper roof. Anthony’s younger brother, Howard, arrived the following year and constructed a porch. Howard, whose skills included photography among others, provided many of the earliest photos we now have of Tacoma. Job’s ex moved here in 1867 with their youngest daughter, Margaret.

In 1869 the cabin became the city’s post office and Carr its Postmaster. He was later appointed mayor – the first in Tacoma.

Meanwhile… Northern Pacific Railroad had for years been constructing a rail line to span the entire country from east to west. After much study and deliberation, Tacoma was announced as the end of the line; the western terminus. This instantly made Tacoma a boom town. The railroad chose a site close to the harbors. Adjacent to the terminus point the railroad began construction on an extravagant hotel designed to resemble a French chateau. Unfortunately, the panic of 1893 brought the company to financial ruin and construction abruptly stopped. That structure would eventually become arguably the coolest looking high school on the planet: Stadium. The terminus area was dubbed New Tacoma, which relegated Carr’s cabin to “Old Town” even if, like Job himself, it wasn’t terribly old by modern standards.

Old Town has gotten older. Today you can find a small museum there; a replica of Carr’s cabin that sits not far from the original site in Old Town Park. It is a great place to pick up some Tacoma history. Pay-what-you-can tours are available during warmer months. More information can be found at jobcarrmuseum.org. 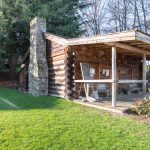