The Historic North Slope is a north Tacoma neighborhood with a style as unique as its shape. Where most of Tacoma’s streets are neatly laid out north-south or east-west, the North Slope is angled as the usual city street grid adjusts to follow the shoreline. Just being there shuffles one’s sense of direction.

The triangular North Slope is bounded by North I Street, Steele and Division. Eighty percent of the homes were constructed prior to 1930. Primarily residential, the neighborhood contains a wide variety of period architectural styles such as Queen Anne, Craftsman, Foursquare, Tudor and Mission Revival, which gives it an early century look and feel. Architectural guidelines are in place to keep that vibe intact. Nearby is gorgeous Wright Park, a 27 acre mature park featuring over 700 tall trees and the W.W. Seymour Botanical Conservatory, a greenhouse open to the public. Recent home sales average $340,000.

But what is it like, this odd wedge with slanted streets?

I caught up with Maria Sevier, a denizen of Diagonal Land, who was kind enough to be interviewed. Doubly so because I failed to mention the purpose of the interrogation. She answered my rapid fire questions without apparent need for rationale. Thank you for your trust, Maria.

Maria’s North Slope home was built in 1937. She insists it is not haunted. But how can it not be? Someone is bound to have died there in almost 100 years. If Maria believes spirits are not rattling around the cellar while she sleeps, far be it from me to pull her head out of the sand. She loves the diversity of the North Slope, the beautiful architecture of the homes and proximity to Wright Park. She says people in the neighborhood get involved with things such as parks clean-up, community safety, historic district meetings and events. “Most of our neighbors are also somehow involved in different community organizations and non-profits in the Tacoma area,” she says.

Maria says there are extra steps if you want to remodel, due to the architectural guidelines. “For example, we would like to replace some of the upstairs windows but in order to do so they have to match the historic look and era of our home and they would have to be approved by the historic preservation committee first. It’s that way for any external structural remodel.” The key is that neighbors need to adhere to the guidelines to get their changes approved. It has been effective. The consistency of period is evident as you drive the North Slope’s tree lined streets, some of which are brick paved. Maria also points out that the district offers some great educational components to their meetings regarding city policies, budgeting, safety, history of the area, and more.

Asked her favorite business near the North Slope she replied “Cafe Brosseau; They make great coffee, offer Corina pastries and Alinas soups. They make great panini sandwiches and yummy, cold summer drinks. They also have a big supply of games so it’s a great spot for game day with friends.” Maria and her husband Marc, by the way, own Sevierly Good Gluten Free Foods whose products can be found at Metropolitain Market near the North Slope.

If you like trick-or-treating (and who doesn’t?) the North Slope is a great place to spend Halloween. The neighborhood is jam packed with trick-or-treaters, so there are lots of costumes to see and residents go all out with decorations; pulsing lights, graveyards in the lawn, dry ice and sound effects. Plus all of the homes are haunted. The North Slope is one of Tacoma’s most charming neighborhoods. According to our past clients and friends who live there it is also a great place to live. 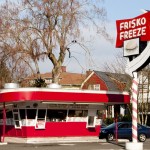