There’s a new food truck in town, and it’s quickly gaining popularity with Tacoma’s burger lovers. It’s Burger Seoul, located at 1750 S. Prospect, on the corner of South 19th street in the parking lot of the 19th Street Grocery & Deli. Owner of the truck, Young La, opened December 12th, and has had a steady stream of customers since.

La’s truck is molded after his original truck in South Korea, which he launched upon his return to the country after graduating from Pierce College. The menu consists of dishes fused from Korean and American cuisine, and they are extremely reasonable. On the menu:

Burgers are served on a brioche roll. La buys both his meat and rolls locally to ensure freshness. They also offer a gluten free bun for an extra dollar.

Fans on Yelp and Facebook describe the food as, “amazing,” “pure deliciousness,” “tasty,” and “the greatest culinary experience.”  The food isn’t the only thing being touted about Burger Seoul. The service is apparently as good as the food. La even comes out and thanks and shakes customer’s hands when he has the chance. Now that is first class service.

When you check Burger Seoul out, dress for the weather as there is not much cover. Also, no outdoor seating so you’ll be eating in your car. Yelp lists the hours of operation from 11 am to 6 pm, but from what I hear, he often sells out of food before closing time. So if you’re hungry for a unique and amazing burger and fries, try Burger Seoul, and get there early. 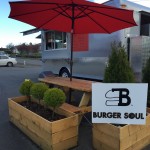