Where to Go to See All Ages Music in Tacoma

You would think, given how much the typical young person enjoys music, there would be no end to the number of venues hosting concerts. High school and college students could pick from an array of potential shows every weekend, and parents hoping to pass on their love of garage rock or old-school jazz could drag their embarrassed kids to a local hot spot. Alas, you would be wrong. Such venues are in short supply, and the turnover is relentless. Below are four beloved music venues in Tacoma that help connect young fans to local and touring artists. 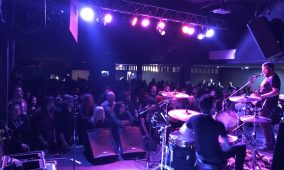 Since opening its doors in the fall of 2015, Real Art Tacoma has embodied the DIY (do it yourself) ethos of punk rock. But the south Tacoma venue, whose previous incarnations ranged from an Arthur Murray dance studio to an all-ages venue called The Viaduct, hosts an eclectic mix of music that includes hardcore, hip-hop, indie, metal and hard rock. Independent film screenings, poetry slams, live charcoal drawings, yoga classes – the list of artistic events occurring under one roof is as exhaustive as it is varied.

“What makes us unique is how we are entirely all-ages, completely volunteer-run and our location here in the South Sound,” explains Jean-Pierre Garcia, a volunteer coordinator at Real Art Tacoma. “The variety of events we have here is awesome, and it’s a place that young people can gather without judgement, without being barred from attendance due to the presence of alcohol.”

Indeed, most 21-&-over nightclubs depend on alcohol sales to remain profitable, but at Real Art Tacoma, it’s truly all about the music.

“All-ages venues typically struggle with a myriad of challenges, which we shoulder also,” Jean-Pierre says. “Not selling alcohol makes our focus strictly on door and concessions sales. Fortunately, we have tremendous support in the music scene and a steady flow of attendance. Having a flexible flow of volunteers allows us to organize into several committees that focus on all sorts of issues vital to running a venue. We also benefit from two storefronts that rent and support us: Thunderdome consignment shop and Makin Music Print & Design. The five lease-holders are committed to keeping this venue running and are hugely involved with booking, financing the space, representing the venue with the city, drumming up support from our neighbors on the block and other nonprofit partnerships. The lease holder agreed to a five-year lease, so we don’t plan on going anywhere.”

Jean-Pierre, or JP for short, says his volunteer work with Real Art Tacoma has helped connect him to his neighborhood – and broaden his involvement in other aspects of community development. The experience has convinced him how important such venues are for neighborhood youth.

“Seeing young people find acceptance, excel and thrive in a high-demand environment is one of the most rewarding pieces to it,” he says. “Plus, the music scene needs the youth. Without it, music grows stale, stagnant or vanishes completely. Every artist started somewhere. We’d like to be that for the next generation of artists.” 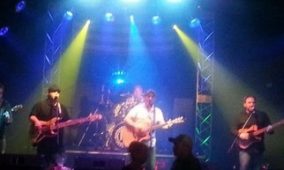 Though technically in Fife, Louie G’s Pizza has been one of the Tacoma area’s most stable all-ages venues since it started hosting shows in 2012. Peter Kesling and his wife Kate McDonough took over ownership in 2016 and didn’t miss a beat. You’ll most likely hear live music that belongs somewhere in the rock and roll genre at any given concert at Louie G’s, but as Peter points out, “This is a music house, and as such, we open the doors to many genres.”

The average first-time visitor is surprised when he or she first enters Louie G’s Pizza. Hidden behind its nondescript exterior is a clean, friendly establishment that does two things exceptionally well: make pizza and host music.

“We are a restaurant first,” Peter says. “We sell great food. When a family comes, they are getting a full night of entertainment and a delicious meal. Mom and Dad can also have a glass of wine or a beer while they are enjoying the music. Not all the other all-ages venues can offer that.”

Meanwhile, a huge stage, complete with a professional PA and lighting system, occupies the back half of the restaurant. Musicians fortunate enough to step on the stage relish the experience as much as those enjoying the show out in the audience.

“A day does not go by that I do not hear anecdotes from people about how they either got turned on to live music as a minor at our venue or they got their first shot to get on stage at our venue,” Peter says. “It is a special place. There is a lot of positive musical energy here.” 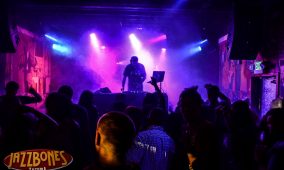 A popular 21-&-over nightclub, Jazzbones in the 6th Ave District has been hosting the occasional all-ages show since it first opened in 2000. Vicci Martinez, an accomplished singer-songwriter, began working the Jazzbones stage at a young age, and others have followed suit.

“A lot of our all-ages shows consist of artists under the age of 21, which is awesome, especially for the kids,” says Jazzbones manager Rachel Hogan. “For the kids, being able to play at a venue on a stage with all the professional sound/lighting is really cool. It teaches them what it’s like for professional artists performing on a stage in front of an audience.”

Most all-ages shows at Jazzbones are scheduled for Sunday afternoons and end no later than 9:00 p.m. To comply with its liquor license, the venue also has to rope off the bar area and add extra staff. But families, in particular, appreciate Jazzbones’ contribution to the all-ages scene.

“We see a lot of families that come out and enjoy music together,” Rachel explains. 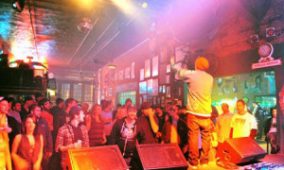 The Swiss, located downtown near the UW-Tacoma campus, changed its license about five years ago to allow minors in the building until 8:30 p.m. daily. That has allowed the Swiss, in tandem with Puget Sound Music for Youth Association, to host an all-ages show on the third Sunday of each month. Other organizations, such as Dace’s Rock ‘N’ More Music Academy and Tacoma School of the Arts (SOTA), have also organized all-ages shows at the Swiss.

“The music played varies dependent upon the band and what they have chosen to play,” says the Swiss’s Carole Ann McQuade. “I think what is unique about our all-ages shows is that they can play in and on an ‘adult’ stage. It feels very authentic to them.”

Because it occupies such an open and airy space, the Swiss is able to provide a large dance floor, roomy stage, professional PA and lighting system – everything an aspiring musician (or proud parent) could want. 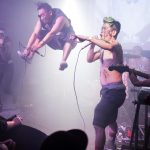