The Cloverleaf in West End Tacoma

If the best things in life are worth waiting for, certainly good pizza deserves our patience. At The Cloverleaf in West End Tacoma, wait times can occasionally stretch to a half hour or more, but the payoff is so good locals have been coming here since the 1960s, when The Sonics (the band, not the team), The Wailers and The Ventures first rocked Tacoma.

Like those bands, The Cloverleaf has become a Tacoma institution, but one that’s still pumping out new material, day after day. South Sound Magazine rated The Cloverleaf “Best Pizza” in 2016. And in a survey the Hume Group conducted last October, The Cloverleaf won the most votes for favorite pizza among our newsletter readers, garnering more than half of the vote total.

The Cloverleaf opened as a tavern in 1950 but started serving pizza in 1961, after Larry Turco bought the business. Larry’s thin-crust recipe was a hit, and after Lennard Manke bought the establishment in 1971, the pizza’s reputation continued to grow. Teenagers gathered at the takeout window outside the tavern to buy pizza, and taverns all over Pierce and Kitsap Counties distributed the thin-crusted dish.

The Cloverleaf began to resemble its current incarnation not long after Debbie Brese, Lennard daughter-in-law, took over the business in 2004 and began remodeling. Today, a friendly tavern occupies the front of the building, while a family dining area is hidden in the back. Repeat customers wait patiently while their pizzas are made to order with fresh ingredients. No precooked shortcuts here.

We dropped in on The Cloverleaf on a frosty January night and passed the packed tavern on our way to the family dining room. With a high ceiling, tile flooring and seventies classic rock wafting from overhead speakers, the acoustics were lively. So were the visuals. Four big-screen TVs showed everything from Gonzaga men’s basketball to the latest episode of Wheel of Fortune. A mural of Safeco Field surrounded us on three sides.

We were immediately seated by a friendly waitress, who was quick to take our order and return moments later with three mugs of water and a carafe of Merlot. An adjoining room stuffed with a pinball machine and video games beckoned, but we were content to munch on a bowl of complimentary popcorn while we waited for our pizza.

Time passed quickly. After a wait of about twenty-five minutes, we came face to face with our order: one regular Margherita Pizza and one regular Turco. If the former, decorated with thinly sliced tomatoes, was pleasing to the eyes, the latter offered a feast for the senses. Five different meats topped the Turco: pepperoni, Canadian bacon, regular bacon, beef and sausage.

So what did we think of the pizza, perennially rated the best in Tacoma? Well, let’s just say we were so excited to dive in that we didn’t remember to snap a photo until we’d already gobbled up half of each pizza. The Cloverleaf is known for its thin crust, which was indeed crispy and wafer-thin. But we also appreciated the balance of ingredients. Not too much sauce, cheese or toppings. Everything working in unison. The Margherita was sauce-free, unless you count the olive-oil base.

We left thinking about what we’d almost ordered for dessert before running out of room: apple streusel pizza. The menu describes it this way: “Traditional pizza crust lined with butter and topped with apple pie filling, sprinkled with streusel and finished with sour cream icing.” 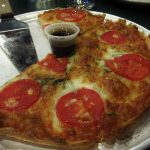