During a recent conversation with someone who had left Tacoma, I asked her what she missed the most. “The Hub,” she answered without hesitation. Breakfast, lunch or dinner. In good weather or bad. She missed being able to stop in on her favorite restaurant in her favorite neighborhood: the Hub in Stadium District Tacoma.

That conversation was all it took to inspire my wife and me to visit the Hub, where we hadn’t dined in months, for dinner one rainy February evening. Turns out, it was exactly as we’d left it: friendly, laid back and full of personality. From the blazing ovens visible just behind the counter to the antique bicycles hanging from the ceiling, the Hub oozes character. Set in a reclaimed industrial space near the funky five-way intersection of Tacoma Ave, Court D and South 2nd Street in Tacoma’s historic Stadium District, the Hub is one of three Tacoma establishments run by Harmon Brewing Co. 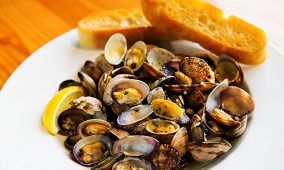 Like many causal restaurants these days, the Hub has a lot going on. Music, big-screen TVs and a steady stream of patrons contribute to a lively atmosphere. But the tall ceilings, cozy lighting and open, airy space help the noise recede into the background. We chose a cozy spot near the front of the bar, which opens out onto a small terrace in the summer. Our affable waiter reminded us it was still happy hour, brought us two glasses of Merlot, then took our orders.

After a short wait, dinner arrived. For my wife, that meant fresh steamer clams, complete with white wine garlic broth, lemon and fresh herbs, plus grilled foccacia bread. I went with my old standby: Pizza Margherita, an artisan pizza smothered in roma tomatoes, fresh mozzarella and fresh basil. Maybe it’s because you can watch your being pizza is tossed behind the counter. Maybe it’s the glow from the fired ovens. Whatever the reason, I count the pizza from any of Harmon Brewing Co’s three joints (the Harmon, the Hub or the Tap Room) as my favorite in all of Tacoma.

We left nary a crumb. And were ready for more. Dessert came a moment later in the form of a dark chocolate and raspberry mousse. The Hub boasts a new dessert specialist in Waiky Shek, owner of The Proper Bakery, a Tacoma bakery that features European-style pastries and desserts. At the top of the Hub’s dessert list? Banoffee pots: banana slices with a gooey caramel sauce, layered with a rich white chocolate mousse, topped with toffee pieces.

We were sorely tempted but ordered the aforementioned dark chocolate and raspberry mousse, along with two spoons. We tried to savor it, but it was gone in a flash, after which we lingered a while. Merlot at the ready. A pair of satisfied smiles mirroring each other.

It makes sense that a person, should he or she ever leave Tacoma, might miss the Hub. But there’s an obvious solution to such heartache: stay. 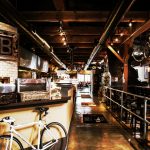