You have probably encountered the Elephant House on North 30th just above Old Town even if you didn’t know it at the time. Even at a glance it stands out from your average north Tacoma residence. It is beautiful for starters; Dutch Colonial architecture, notable for extensive use of Wilkeson sandstone and stately columns. Perhaps you did a double take of the otherworldly tubular sculpture on the front lawn which at night is illuminated colorfully from within by a carnival of blinking LEDs. But there is even more to the Elephant House than meets the eye.

In 1921 the Walker-Wilkeson Stone Company was owned by Robert Walker. So it is no surprise that when Walker built a home for himself it would showcase supreme examples of local sandstone. The fireplace is a masterpiece. When the company fashioned a fireplace for the Governer’s Mansion in our state capital, they created a backup. The backup went into Walker’s personal home – the Elephant House.

In 1939 the home was sold to Ray Gamble, himself a colorful figure in Tacoma’s story.

Ray arrived in Tacoma by boxcar in 1892. He had less than a dollar to his name and set about earning a living selling newspapers, and later fish. With a curious mind, he saw great potential in the 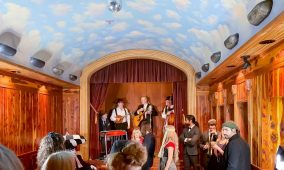 of sawdust in the lumber mills of Tacoma. He developed a method of converting the sawdust to a powder. The powder was effective in controlling fishy odors during seafood processing. It was also useful as a buffer and accelerant for explosives, which was fortuitous timing on the eve of World War I. Needless to say, he was soon a millionaire. Now a man of means, Ray was able to indulge other interests, such as magic. He loved magic and befriended many of the era’s well known magicians. He would invite them to his Tacoma home, whose basement now boasted a small theatre with stage for the performance of magic, even outfitted with a cubbyhole at stage left designed for the quick concealment of rabbits. Gamble added secret compartments in the walls revealed by moving wall panels. Here he hid a collection of machines for gambling. His legendary parties were said to be attended by the likes of Will Rogers, Orson Welles and Beatrice Houdini (widow of Harry), to name a few. 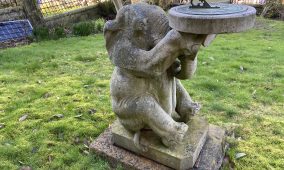 Gamble developed an interest in elephant sculptures including statues, lamps and planters. His odd collection blossomed to over three thousand pieces. To this day, there are still elephants on the property. The present owners tell of family members of the late Ray Gamble stopping over periodically. Almost without fail, they ask about the two-tailed elephant, a family favorite. They are delighted to learn that this piece still occupies its place in the backyard. It wasn’t always two-tailed. Gamble was apparently delighted by the small tail poking out from beneath the sitting pachyderm’s thigh on one side. Sadly, this effect was only apparent to those standing on one side of the statue. An improvement, he thought, would be to have the tail visible from either side of the statue, so he had one added.

Neighbors later described driving by and spotting an intense glow of neon lights streaming out through cracks around the garage door at night. Gamble so believed that his classic cars benefited from regular neon baths that he had neon lights installed for this purpose.

His real estate holdings including the building that is now Knapps Restaurant and the Casablanca Apartments where evidence of Ray’s extensive tile collection can still be seen.

Ray Gamble, salesman, magician, inventor and collector of odd things passed away at the age of 86 in 1972.

The home’s current owners are my favorites and not only because I know them personally. They are worthy successors to an interesting history. Perhaps there is something in the water. We met Steve and Natalie LaBerge at Burning Man, an arts festival in Nevada that (usually) happens the week leading into Labor Day. Steve has produced numerous art pieces for the event, pieces I have interacted with and really enjoyed, including a mutant vehicle dubbed Crawlrus, which you may have spotted around town in past years, and two delightfully interactive pieces currently residing at Alma Mater in Tacoma. The couple recently invited my wife and me for dinner where we got a tour of the house and a look at Steve’s studio with work in progress. These two are a delight to be with, particularly as they speak of ideas; creative possibilities. They light up, not unlike so many of Steve’s creations. Steve’s go-to medium is translucent fiberglass. It is toxic and quite smelly to work with, but it is durable and once shaped allows the pieces to be lit with programmable LED lighting from within. For example, one recent piece currently at Alma Mater features a bank of televisions individually decorated by local artists with their varied takes on television’s influence and impact. It has very interactive lighting. It is capable of recording a person’s movements against a green screen, like dance moves, and replaying the person’s silhouette and movements with the LEDs. It is fun to see and I can only imagine tricky to program. 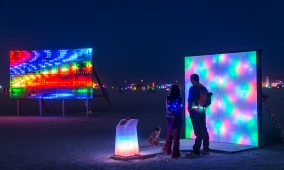 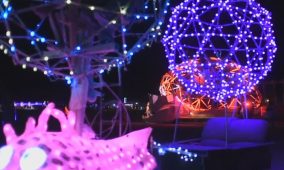 TVs (left) and “Crawlrus” (right) at Burning Man in Nevada 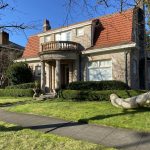 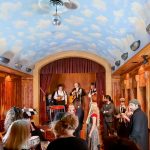 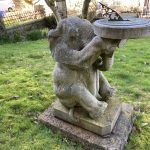 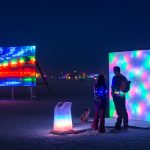 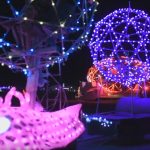