We felt a shift maybe eight weeks ago, due to much higher interest rates.

I was looking at the Tacoma single-family home sales for July and comparing them with May, interested to know how the numbers compare to our actual experience and what we think is happening since the shift was felt. The data generally supports our sense of things.

The average time on market in May was 10 days. Now it is 13. I would have guessed a bigger swing, but it moved in the expected direction.

If you are thinking of making a move there are some decent arguments for doing that in this environment. For one thing, the market still favors sellers. The market currently has 1.6 months’ worth of active inventory. So selling a home still seems like a logical thing to do, and buying just got a little easier. Many of you were hesitant to sell during the crazy because where would you move? You might be able to find a home in this market. The seller MIGHT even look at a contingent offer. There are 12 contingent sales in Tacoma right now. That’s a small percentage of the 356 pending sales, but it’s not nothing. Interest rates are higher, yes. They recently came down a bit. The Wall Street Journal said the average was around 5% right now. They could edge higher over the coming months, then hopefully pull back a bit once inflation relents. But if you think interest rates will come back down in the future that may not be a reason to wait, because refinancing at a lower rate later would be an option. 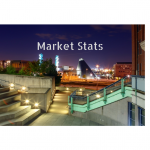