Since November 13, 1923. That’s how long the Blue Mouse Theater in Proctor District Tacoma has been welcoming moviegoers into its venerable Craftsman-style interior. For nearly a century, locals and visitors alike have cherished Tacoma’s — and the state’s — oldest continuously operating movie theater.

Romantic comedies. Actions flicks. Horror films. All have found their way onto the screen at the Blue Mouse, which these days offers movie buffs a unique blend of modern and old-fashioned ambiance. A digital film projector and updated acoustics are juxtaposed against craftsmen staircases and Tiffany-style glass exit signs.

The cozy lobby and 219-seat theater will take you back in time. So will ticket prices. Regular admission starts at $6 for adults and $5 for seniors and kids under 16. Tickets for showings on Monday and Tuesday evenings, meanwhile, go for just $4. Likewise for weekend matinees. All films are second-run, which means if you somehow missed that movie you couldn’t wait to see a while back, you’re in luck. It might be showing now at the Blue Mouse.

A hub for movie aficionados

More than just a theater, the Blue Mouse serves as a hub for movie aficionados. On the second and fourth Saturday of every month, the Blue Mousketeers perform onstage against a backdrop of the cult classic, The Rocky Horror Picture Show. Still as outrageous as it is entertaining, the 1975 movie encourages audience “par-tici-pation.” Put on your craziest outfit (and your dancing shoes) for this one.

Are you a horror film buff? Check out Friday Night Frights. On the third Friday of every month, a classic horror film is shown at 10:00 p.m. This month’s feature is Poltergeist (1982). The Amityville Horror (1979) and Silver Bullet (1985) follow in June and July, respectively.

In 2010, the Blue Mouse was added to the Washington Heritage Register and the National Register of Historic Places. Its long run of success promises to keep it on the map for years to come. 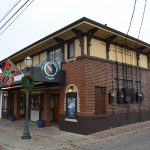