Hidden on the second floor of Tacoma Public Library’s main branch downtown is a local treasure worthy of your exploration: the Northwest Room. Topped by the warm glow of Tacoma’s “original dome” and buttressed by marble columns, the Northwest Room provides Tacoma citizens with everything they need to rediscover their past.

The Northwest Room occupies the second floor of the original Carnegie Library. Built in 1903, it offers one-stop researching for a variety of visitors. David Domkoski, who has served as a community relations officer at the Tacoma Public Library for just shy of three decades, is well acquainted with the Northwest Room and its patrons.

“They research the history of their home, because our staff has put together a number of homegrown resources for that,” David says. “They research their genealogy, the history of their family. We do have a lot of people who are curious how and why Tacoma developed the way it has. We get a lot of people who are writing books who are researching everything from the history of the railroad in the Northwest to race cars. The Tacoma area had the premier race track once upon a time where Clover Park is now. It was a wooden race track, and people like Eddie Rickenbacker raced on it after World War I.” 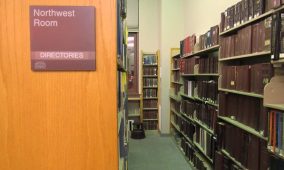 Two particularly popular resources at the library are its photo collection and its aisle stuffed with old RL Polk Directories.

A sense of discovery

Suffused in the warm glow from the domed ceiling, patrons sit quietly at roomy tables, lost in their research.

“There are a lot of people there who are researching information for their next book, their next news story, and you wouldn’t know it,” David says. “There are people making discoveries about their family they never knew or about their home. The Northwest Room has a wonderful sense of discovery to it. It’s warm and comfortable, like being with an old friend.”

The crown jewel, perhaps, is the Murray Morgan Room. It houses his rare collection of books, many of which contain his personal annotations, along with the many titles he authored.

According to David, “One of the strengths of the Northwest Room is its staff. They’re historians. They’re researchers. They are very user-friendly. No matter what kind of materials or archives you have, they’re only as accessible and as good as the staff you work with.”

If you’re working on a family history project or just want to know more about Tacoma, your search can begin and end at the Northwest Room. 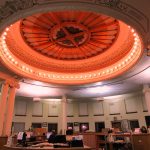