Tacoma Elks Building to be Transformed by McMenamins

We’ve been hearing for some time about the Elks building downtown being bought by McMenamin’s (brewer/distiller/hotelier) but prior to a few weeks ago I had zero concept of what that might mean. Then Nicole and I spent two nights at their Edgefield Resort just outside of Portland. It was a remarkable experience. Once upon a time that property was a poor farm. It morphed into an old age and convalescence home after WWII. The whimsical artwork adorning just about every surface at Edgefield celebrates this history. The rooms, decorated in a turn of the century style consistent with the building, lack telephones, televisions and bathrooms. As insane as this may sound, we did not mind not having a bathroom in the room. Walking to either end of the hall, toothbrush in hand, to the community baths was reminiscent of dorm life and lent a sense of a shared experience. Around the property there is a lot to explore. Even small farm sheds have been repurposed as cozy, miniature drinking establishments where you can order something delicious to drink, something brewed or distilled right on the property, then carry it around wherever curiosity leads you next. You can catch a movie in the theater at The Powerstation, go for dinner at a number of places or steep in the soaking pool which serpentines in a loop behind Ruby’s Spa. There is frequently live music to be heard. One tiny room serves as a Grateful Dead themed bar. Nicole and I left with the conviction that if something so fun and interesting existed in Tacoma we would visit regularly. That looks promising. I traded emails with people at McMenamin’s and was told they have not yet started construction on the Elks building; still working through some details. They anticipate a 2014 opening. Listed on the National Register of Historic Places, the Elks Lodge was officially purchased by McMenamin’s in 2012. The property will include approximately 45 guestrooms with private baths, space for live music, events, weddings and meetings; a ballroom that will feature a tiny indoor city with “cabins,” skylights, gardens, terraces and more; three restaurants, a McMenamin’s brewery, and a rooftop garden that will provide the restaurants with fresh, seasonal ingredients. I think it will provide yet another reason to love T-town. 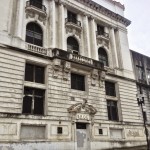