Polar Plaza, located at the corner of Pacific and 17th, is Tacoma’s answer to the holiday blues. Sponsored by several organizations, including CHI Franciscan and Metro Parks Tacoma, the cheery destination provides a place for all-comers to frolic on ice.

First-timers and future Olympians alike thrive at Polar Plaza, now in its sixth year. General admission costs $11. Youth ($10), those with their own skates ($8), children five and under ($5), seniors and the military ($10) and non-skating guests ($3) pay less for admission. The rink, which this year opened its doors a week before Thanksgiving, will remain open through New Year’s Day.

Not all days and nights are the same at Polar Plaza. Special events range from karaoke to Thrifty Thursdays. A DJ will help ring in the New Year on First Night, when the rink will be open until midnight (general admission drops to $8).

While passersby pause to watch the spectacle, skaters negotiate wide-arcing turns and the occasional bum-bruising fall. At Polar Plaza, the air is always frosty, the fun is ongoing and the holiday cheer is contagious. 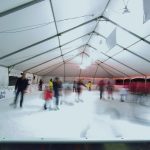