Aside from the Tacoma Dome, no Tacoma landmark owns a more prominent position than LeMay. Behold the largest automotive museum in North America. Situated on a nine-acre campus near the Dome at the junction of I-5 and I-705, the 165,000-square-foot museum first opened its doors in 2012. If you’ve yet to drop by, consider this a guide for your first visit to LeMay, America’s Car Museum. 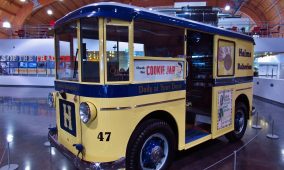 You might be tempted to think LeMay is for car aficionados only. But anyone with even a passing interest in how Americans have been getting from Point A to Point B since the late 19th century will be spellbound by the visual history on display inside LeMay’s enormous space, which from the outside resembles the raised profile of a sleek muscle car’s hood vent.

Indeed, stepping inside the museum is like going back in time. Whether you relate to NASCAR, rare and vintage relics from a bygone era or charming old ice cream trucks, you’re likely to find something that piques your interest at LeMay. The variety (not to mention the sheer number) of automobiles on display is astonishing.

Give yourself plenty of time for your visit 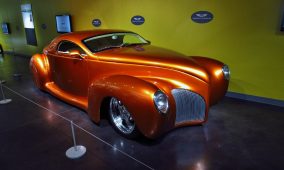 After you wander the showcase gallery on the plaza level, peering inside an old paddy wagon or towering over a tiny three-wheeled BMW, give yourself a pat on the back. You’ve just feasted your eyes on a potpourri of trucks and cars, old and new, American and foreign — enough to send your imagination on a cross-country road-trip to a long-lost decade.

But you’re just getting started. Three levels await your exploration below. There’s Level Three, a tribute to a lost era, when cars were bolder on the outside but simpler on the inside. And when mechanics tinkered with engines in Lucky’s Garage. There’s Level Two, which sports the Speed Zone, among other attractions. And there’s Level One, home of Club Auto and the NAPA Auto Care Center. And between each level are two causeways, one on the left, one on the right, that are so gradual you’ll hardly notice you’re descending or ascending. Each causeway offers its own portal into the world of automobiles, with themes ranging from Route 66 to alternative fuels and experimental designs.

You can speed through your trip in a blur. Or you can take your time and savor every funky hood ornament, whitewall and dashboard.

Just like you might free-associate while driving a long stretch of open road, you’ll likely find your mind wandering as you roam the museum’s levels. What type of car do you most identify with and why? Are you a spiffy little British speedster from the sixties or an old luxury Packard? How did the grand-yet-whimsical contours of automotive design that flowered so profusely in the forties, fifties and sixties devolve into the boxy, unimaginative, wood-paneled station wagon of the early eighties? How did people fit in those tiny seats a century ago? Why has progress on the electric car been so slow? The first ones were puttering along roads in the late 19th century. How have social and economic trends affected the way we travel?

Who knew cars could provoke such big thoughts? 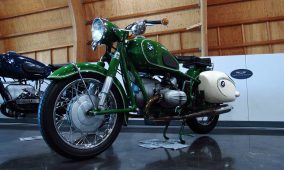 All told, the museum might challenge young children. There’s just so much to see. Fortunately, there are wide spaces for the kids to maneuver. Also, tall ceilings on the Plaza Level to absorb their squeaks and squeals and plenty to distract them while you admire that old Studebaker. There’s a cafe up top and racing simulators and slot cars (complete with realistic, scaled-down motorway) hidden in the museum’s depths. Every floor features informative displays and something to captivate the little ones.

When you’ve digested all you can, stop by the gift shop on your way out. Collectibles, fifties-era mechanics’ shirts and other souvenirs are available to help you remember your visit.

Story by MATT KITE, photos by GIBSON KITE for the HUME GROUP 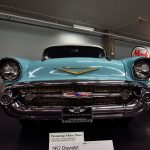