The Best Donuts in Tacoma

Where to find the best donuts in Tacoma

Mmm. Donuts. Homer Simpson isn’t alone in his obsession with donuts. Americans love their donuts. And judging by the number of donut shops with a Tacoma address, it seems the City of Destiny shares that mania. Indeed, for a mid-sized city, Tacoma is home to a surprisingly diverse array of donut shops, from roadside shacks to swanky establishments.

My son and I spent a Saturday afternoon visiting four popular donuts shops in Tacoma proper. Each has earned a loyal following the hard way: one gooey, sugary, doughy treat at a time. But which one makes the best donut? Read on to find out.

Our first stop was at this favorite of local commuters. Situated near Tacoma’s transit hub in the Dome District, Dockside Donuts doesn’t waste time on ambiance. After a short wait at the drive-through window, we ordered a maple bar and a plain glazed donut. The maple bar was melt-in-your mouth amazing. The glazed, meanwhile, was light, fresh and airy, with just the right amount of glaze. We were tempted to order more, but alas, we were on a mission and had to keep moving.

The Original House of Donuts

Occupying a bustling street corner in Tacoma’s spruced up Theater District, The Original House of Donuts could just as easily own a hip Portland address. It won us over with the three small cake donuts we tried: red velvet cake, chocolate vanilla and blueberry with icing,. All three were made from a heavenly cake batter: fresh, fluffy and soft. The cream cheese frosting on the red velvet cake cut through with zest. The chocolate vanilla offered a nice contrast between the chocolate cake and the vanilla icing. And the blueberry with icing was refreshingly sweet.

Everything at Legendary Doughnuts in the 6th Avenue District is big, so you’d better bring a big appetite. We ordered a “Yogi Bear” bear claw, which is nearly stout enough to serve as a catcher’s mitt, and a white chocolate raspberry cake donut. The former was stuffed full of peanut butter and jelly. The latter was covered in thick, decadent icing and oozing with tasty raspberry jelly, which paired perfectly with the chocolate cake. Both were off-the-charts sweet, dense and heavy. Not to be trifled with.

A favorite in Tacoma’s West End neighborhood, Pao’s was pretty well picked over by the time we arrived. But we still spotted a few tantalizing donuts behind the counter: a maple bar, an old-fashioned and a Bavarian. The maple bar was sweet—almost too sweet—and heavier than its counterpart at Dockside. It was also a touch drier. The old-fashioned donut surprised us with its unique, lemony taste. The Bavarian contained just the right amount of light and creamy custard inside and was complemented by a light coating of powdered sugar. It’s no secret why this place is so popular.

For the best no-frills, old-fashioned donuts, we preferred Dockside, whose offerings were so light and airy we felt like we could have overindulged without regretting it later. The Original House of Donuts, meanwhile, is our choice for the complete donut experience. The shop is open, cheery and offers plenty of seating in a fun part of town. One group of young men ahead of us bought T-shirts before leaving; they loved the donuts that much.

All four shops are worth visiting at least once. In fact, you’ll probably find that more research is in order. Your taste buds will thank you for your diligence. Your waistline? Maybe not so much. 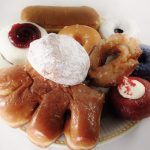