Every so often I bring a Tacoma business to your attention, particularly if it is fascinating like the one I am about to mention. Uncharted Waters opened last Thursday on South 12th and Proctor. My client and friend, Jonathan Murray has been working on this for years and was thrilled to finally launch. Uncharted Waters offers sensory deprivation. That is just about what it sounds like. Guests float in total darkness and silence inside cabins, unable to feel the water in which they float due to the temperature (93.5).

But why would a person want to spend an hour of their life floating in total darkness? There are many benefits attributed to the use of sensory deprivation tanks including increased release of endorphins (pleasure) and reduction of cortisol levels (stress). Floating is believed by some to help alleviate depression and anxiety. The Epsom salt which causes buoyancy is an anti-inflammatory. The lack of stress on your body when floating is said to be relaxing and can provide relief to people suffering from back or joint pain. Some claim that time spent in the tanks has a transformational effect on consciousness. It inspires deep introspection, creativity and flashes of clarity. Soldiers returning from combat and others suffering from post-traumatic stress disorder can benefit. 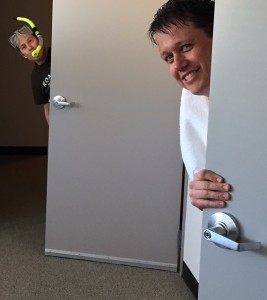 The tanks were originally developed in the 1950s. They studied how the mind would react to removal of stimuli. Some research included LSD. I asked Jonathan if it was a coincidence that he opened a float center after the legalization of cannabis in Washington, or that there are three stores selling marijuana kitty corner.

“No, it really has nothing to do with that,” he replied.

“Are you stoned now?”

“Jonathan, can my readers get a sweet deal on an introductory float if they come in and say the code phrase “The Hume Group is my favorite real estate team on the planet”?

“I would be glad to offer a 10% discount to readers who utter that code phrase.”

If you decide to visit Uncharted Waters, you will not need any help from the nearby cannabis stores to find an altered state of consciousness. Matt and I tried a float and can attest to this. I had a blast, actually, and without any dry mouth, paranoia or Dorito craving. Within about 20 minutes I went into what I would describe as a partial dream state. It was very relaxing and unlike anything I have ever done. I scarcely noticed the passage of time. Gentle underwater music brought be back to reality. I think it is worth trying. Matt and I both intend to float again. And since The Hume Group really is our favorite real estate team on the planet, we stand to realize a nice discount. 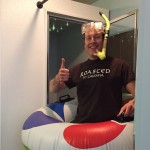