It all started in 1986, when Brian Herbert wanted a hard drive for his computer. Back then, most computers relied on floppy discs and storage was at a premium.

“I found a place in Tacoma that had a 10-megabyte hard drive,” he recalls.

You read that correctly: 10 megabytes. Like personal computers, Brian has come a long way. What started as a part-time hobby – building computers in his home for friends and fellow Air Force personnel  – blossomed into a full-time business not long after Brian came home after serving in Desert Storm in 1991. He opened his own store, and Last Stop Computers was born.

By 2001, he had bought the building at his current location in 6th Ave Tacoma district. These days, Brian’s son Andrew works there, too, as do other tech heads who are fluent in hardware and software.

“It’s been good,” Brian says of his family-run business. “I can’t complain. It has taken care of my family and a lot of people. We  try to make people happy, so it’s all word of mouth.”

Whether your laptop just crashed or you want to custom-build your next desktop computer, the good folks at Last Stop have you covered. Fast turnaround and low rates (they never bill more than two hours’ labor) ensure a steady supply of satisfied customers. 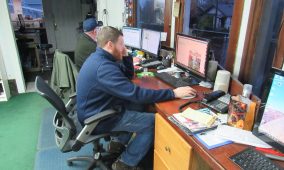 You can count my family among Last Stop’s repeat customers. Brian and crew saved my work desktop after the motherboard fried. They replaced the keyboard on my wife’s work laptop after it gave up the ghost. And they installed a bigger hard drive in our family’s desktop, which was overstuffed with photos and home movies. As if that wasn’t enough, they quarantined and killed a virus or two, as well.

Brian’s first word of advice: back up everything.

“I can always replace the hardware but not the data,” he says. Indeed, he has helped his share of heartbroken customers who neglected to back up precious photos or important files.

Another tip: keep your wits while surfing the Internet. If something pops up on your screen instructing you to click on a link or call a phone number to “fix” your computer, close your browser immediately. Most of today’s viruses, Brian says, are extortion scams.

My family used to pay for expensive virus protection software on our PCs until we talked to Last Stop. Andrew recommended we stick with Microsoft Security Essentials, which is free and comes installed on most computers that run Windows these days. As soon as we did that, our computers ran faster and were far less likely to become infected with the latest virus.

Part of the community

Along with helping individuals and families, Last Stop gives top priority to local businesses. And it’s not unusual to find a young high school student hanging around one of the work benches, where tricks of the trade can be absorbed by those with sufficient curiosity. Often those students go on to work at Last Stop.

Asked why he got into the business, Brian has a simple answer. “Nobody could fix my computer,” he says. 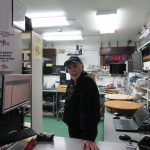