My wife and I usually ponder the same two options for New Year’s Eve; go to a party or lay low and hit the sack before the ball drops. In recent years the latter option is a heavy favorite. However, last year we decided to give First Night a go, along with our 13 year old daughter and her buddy.

First Night is a festival in downtown Tacoma’s Theater district. It is alcohol free. I realize that might seem curious for New Year’s Eve, a holiday often intertwined with booze. You won’t miss it – First Night is a blast. Imagine, you won’t need a designated driver or Uber to get home safely. Plus, you’ll wake up in the morning not wondering if it was a good idea to put a lampshade on your head. (Note: The lampshade is always a solid idea.) 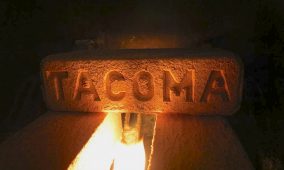 We saw lots of great bands and performances at a variety of nearby venues, with shows beginning every few minutes. At First Night, if you don’t like what is happening simply wander to something different. There are acts indoors and out. Last year New Year’s Eve was crazy cold, but one could warm oneself beside bonfires featuring presto logs shaped into the word “TACOMA”. Nice touch, First Night.

This year I am excited to catch some local favorites like Pearl Django, Stephanie Anne Johnson (The Voice) and many others. Here is a growing list of who you can see.

To do this you are going to need a First Night button. I had some trouble rounding ours up at the last minute last year, so plan ahead. You can buy online or at various establishments around town, such as King’s Books, Hotel Murano, Parkway Tavern, Bluebeard Coffee and others, found here. The price is $12 unless you wait until the last day when buttons sell for $15 if you can find them. Either way it is a bargain and you should give it a try. Please say hello if you see me. Just look for the cool guy with a lampshade on his head. 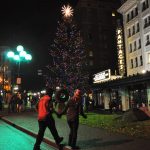