My wife is a volunteer board member of the Broadway Center for the Performing Arts, an organization that manages the Pantages, Rialto and Theater on the Square for the citizens of Tacoma. That bears repeating. These fantastic historic buildings belong to Tacoma.

On November 21st we attended the kick-off for a capital campaign to raise $24.5 million to preserve, beautify and improve the theater district. In attendance were Mayor Marilyn Strickland, Congressman Derek Kilmer and Deputy Mayor Ryan Mello.  David Fischer, Executive Director of the Broadway Center gave the keynote address.

Throughout the program of speakers, the point was made in many ways how much our Theater District is a gathering place for Tacoma. I couldn’t begin to count how many shows and events I have personally attended here over the years. My kids have acted in countless plays and musicals through the Broadway Center’s educational programs. Nicole and I regularly attend shows at the Pantages. In recent memory we’ve seen Pink Martini, the Musical “Once” and Neko Case, just to name a few. Invariably we meet friends and neighbors at these events and always come away with a genuine feeling of community.

“For more than 100 years of convening at 9th and Broadway, our social fabric has been strengthened. We have gathered – rich and poor, black and white, LGBTQ and straight, Jew and gentile, and every other demographic – we engage the whole of our community and, then often with the help of a performing artist and through ideas, we open ourselves up – empathy kicks in, barriers are reduced and we connect as human beings. The Broadway Center provides a non-mediated, person to person connection, and that’s something truly special. 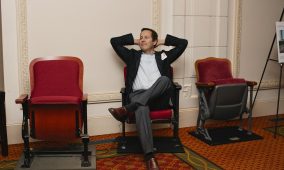 The campaign will fund many improvements including a new outdoor plaza, a new busker stage for street performers, seismic safety improvements, historic preservation of the building interior, and addition of a center aisle and new seats. New seats and a center aisle to break up what is currently a long expanse of seats will be very welcome enhancements!

I came away from the evening nostalgic for all that has happened in these grand old structures, glad they exist, glad they are a part of life in Tacoma, and thankful for Broadway Center’s stewardship of these treasures so that our children’s children may enjoy them as we do.

The Broadway Center now has a page for all things capital campaign. I imagine in the coming months we will be offered ways to help and get involved.

By Tom Hume, The Hume Group 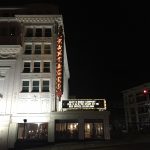